"I worked as a militant for the North, which was very important work. We had to bring rice, weapons, and ammunition to the soldiers in the south. One day, in June 1968, when we were transporting goods, three US airplanes discovered us and began to shoot at us. So we took our guns and fired back. When I shot the first time, I didn't hit the plane. So I lay down and placed the rifle against the tree and aimed. When I shot the second time, I shot right at the gas tank, and the whole airplane exploded, and crashed into the next hill.

"Then I saw something falling from the sky - I thought it was a bomb, but actually, it was the pilot parachuting down. So I ran, followed the parachute. When the pilot landed, he had already untied one side of his parachute, but I came and put my gun right to the guy's neck, and said, "Stay still." He raised his hands, and I told my friends that they should cut up the parachute rope, so we had something to tie him with.

"Thirty-six years later, a man from a government office called. He asked, 'What did you do during the war, did you achieve anything?' After I told him the story, he told me that General Giáp had been looking for me for 36 years. When I met with him, General Giáp asked me, 'Why are you so good?' and I said, 'It's probably also luck, but I just followed the words I was taught.'

Ngo Thi Thuong, born 1946, photographed in her bedroom in Hue, Vietnam with a portrait of her with General Võ Nguyên Giáp taken when she was honored for shooting an American F-101 Voodoo in June 1968. July 2010. 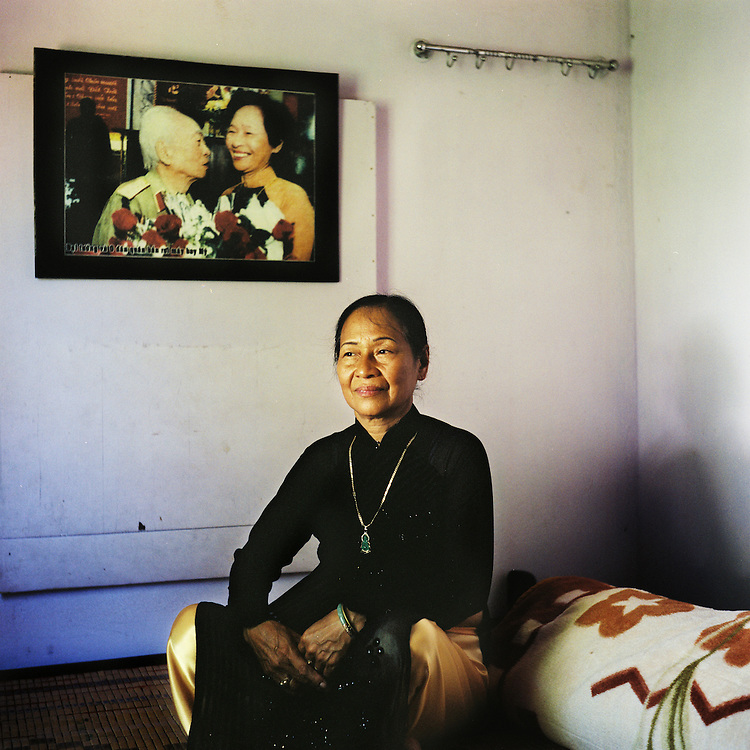